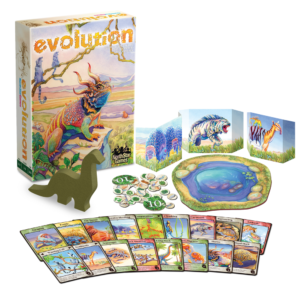 Evolution: The Video Game is launching with a bang today: we’re giving away 1,000 copies of the Evolution board game. That’s 10 a day for 100 days straight!

To give avid fans the best of both worlds – and to prove we’ve really made an awesome adaptation – North Star is offering players of the new video game a chance to win the board game as well. The first multiplayer game they finish each day will enter players in a drawing to win that day’s drawing for the board game. Ten winners will be chosen each day and will receive a special code to order their copy. Players can enter from anywhere in the world and will be responsible only for the cost of shipping. The full rules for the giveaway can be found here.

With this seismic event, North Star hopes to encourage new and old players alike to see for themselves how unique, beautiful, and engaging the video game is, and reward them for their enthusiasm in supporting our first digital venture. With the free sample of Evolution: The Video Game, available on iOS and Android February 12th, players will be able to try out several levels of the campaign, and even enter their one multiplayer game each day for their chance to win the board game. The game is also available on Steam for PC and Mac.

Winners of the ten daily drawings will be announced on North Star Digital’s Facebook page, and contacted by email to claim their board game. Be sure to download Evolution: The Video Game on February 12th and get in your very first multiplayer game by joining us for our all-day charity stream on twitch!