Evolution is Coming to the MomoCon Indie Showcase 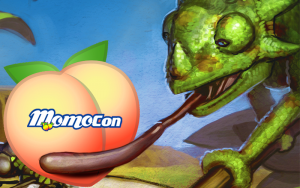 It should come as no surprise to anyone that the North Star Games crew loves Evolution, but it turns out that people in charge of MomoCon love it too! Evolution: The Video Game is one of twenty finalists selected for the MomoCon Indie Game Awards! That means we’ll be exhibiting at MomoCon’s Indie Showcase in Atlanta, GA from May 23rd – 26th, and we’ll be wracked with anticipation the whole. Entire. Time.

Now that the video game is officially released, our booth at MomoCon will have stations set up to play both singleplayer and multiplayer, and attendees will truly be able to see everything Evolution has to offer. We’ll also be sharing more information about two new game modes coming to Evolution in the next few months: Asynchronous and Pass-and-Play. Steam keys for the Evolution video game will be available at a show-exclusive discount, and we’ll also have our massively popular limited-run Long Neck enamel pins available for sale, so get them while they last.

This is our first time attending MomoCon and we couldn’t be more excited to bring Evolution: The Video Game to a new group of fans…or soon-to-be fans, as the case may be. To really make an impression, North Star will also be bringing several board games for MomoCon’s play-to-win board game area, which means you can go home with your very own copy of one of our most popular board game titles! Stop by booth 1030 in the exhibit hall – part of the Indie Games Showcase section – to see why Evolution: The Video Game has earned so much recognition, and why it deserves a spot in your game library! Learn more about MomoCon and the Indie Game Awards here.